Expats can now own freehold property in Abu Dhabi zones

Abu Dhabi will now allow all foreigners to own land and property in investment areas on a freehold basis after making changes to its real estate law, state news agency WAM reported on Wednesday.

“This will not only further drive the maturity of Abu Dhabi’s real estate market, but will also increase transparency and provide clarity of title for property owners, increasing long term investment, injecting more liquidity into the market and encouraging longer term residency,” Aldar chief executive Talal Al Dhiyebi said in a statement.

Aldar announced on Wednesday a recently launched residential project on Abu Dhabi’s Yas Island, where land and property can be sold to all nationalities, had sold out and generated over 400 million dirhams ($109 million) in sales.

The Abu Dhabi Executive Committee raised a proposal to update the Real Property Law, following a study on the emirate’s real estate sector, and the holding of a series of meetings with stakeholders, investors and real estate developers, to identify means to develop the sector, and consolidate the status of Abu Dhabi as an investment destination.

He noted that the amendments will have a positive effect on the real estate sector, and will encourage investors to acquire land in designated investment zones within the Emirate of Abu Dhabi, with ample room for development opportunities.

Decree stipulates
In his capacity as Ruler of Abu Dhabi, the President, His Highness Sheikh Khalifa bin Zayed Al Nahyan, has issued a law amending provisions of Law No. 19 of 2005 concerning real estate sector in Abu Dhabi. The new law stipulates amendments to Articles 3 and 4 of the ‘Real Property Law’.

Article 3 (i) stipulates the rights to own property are limited to three categories the first being Emirati citizens, natural or legal persons, the second includes public holding companies with ownership not exceeding 49 per cent non-nationals, or the third as any person to whom a decision is issued by the Abu Dhabi Crown Prince or the President of the Executive Council.

While Article 3 (ii) stipulates that non-UAE nationals, natural or legal persons, shall have the right to own and acquire all original and in-kind rights in real estate properties located within investment areas. 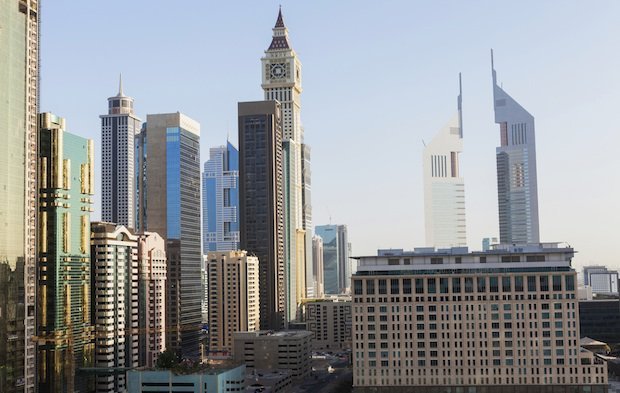 Dubai’s non-oil private sector economy expanded at a faster rate in March, with total business output increasing at the fastest rate since January 2015, according to Emirates NBD.

The seasonally adjusted Emirates NBD Dubai Economy Tracker Index — a composite indicator developed with IHS Markit and designed to give an accurate overview of operating conditions in the non-oil private sector economy – rose to 57.6 in March, the highest since May 2018, from 55.8 in February.

The March figure was also the joint-highest in nearly two years and above the long-run average of 55.2 for the series since 2010, the bank noted.

The improvement in non-oil business activity was led by the travel and tourism industry – which reached a record high of 59.8, and wholesale and retail, which stood at 59.7, just shy of the last record set in October 2017.

However, business conditions within the construction industry were the weakest in 28 months due to a softening in new order growth, Emirates NBD said.

Business conditions improved at stronger rates in travel and tourism. Travel and tourism saw its headline index reach a record high of 59.8, while the headline figure for wholesale and retail was 59.7, just shy of the peak set in October 2017.

However, business conditions within the construction industry were the weakest in 28 months (51.8), due to a softening in new order growth, Emirates NBD said.

“While the rebound in the headline Dubai Economy Tracker Index is encouraging, it is clear that firms continue to price discount in order to secure new work and boost activity.  The pressure to cut costs means that the recovery in the volume of activity has not translated into much job growth in the private sector,” said Khatija Haque, head of Mena Research at Emirates NBD.

Total non-oil private sector output increased at the fastest pace since January 2015. Moreover, the rate of expansion was the fifth-strongest on record since the series began in 2010. Of the three key sectors, travel and tourism posted the steepest growth.

Workforces were expanded to support activity levels in March, although the rate of job creation was modest. This partly reflected broadly no change in staffing in the travel and tourism sector.

Inflows of new business to private sector non-oil firms in Dubai rose in March. Moreover, the rate of expansion was the fastest since May 2018. Travel and tourism posted the strongest growth among the three key sectors. Meanwhile, companies’ expectations for total activity over the next 12 months were the second-strongest on record in March.

Average input prices rose for the twelfth month running in March. That said, the rate of inflation was modest and eased since February. Cost pressures were strongest in the travel and tourism sector.

Non-oil private sector firms in Dubai cut their prices charged for goods and services for the eleventh month running in March. This marked the longest sequence of discounting since the series began in 2010. The rate of price discounting was the steepest since December 2018.

Dubai remained an attractive destination globally for foreign direct investment (FDI) as it recorded 41 per cent year-on-year growth in FDI last year to Dh38.5 billion, placing the emirate in the first position in total number of FDI projects and capital flows.

The emirate bucked the global trend as FDI worldwide declined 19 per cent in 2018 as reported by the United Nations Conference on Trade and Development (UNCTAD).

According to ‘Dubai FDI Annual Resorts and Ranking 2018’ released by the Dubai Investment Development Agency (Dubai FDI), the emirate attracted 523 FDI projects in 2018, an increase of 43 per cent over 2017, elevating the emirate’s global ranking in the number of new investment projects to third from fourth.

More importantly, FDI projects created about 25,000 new jobs in 2018, an increase of 77 per cent compared to 14,065 jobs in the previous year, effectively placing Dubai in 9th position globally in job creation through FDI.

“The first rank is a precursor to Dubai’s future achievements,” he said.

The official data showed that the US retained its leading position in FDI capital flows to Dubai with a 37 per cent share, while India came second with 12 per cent, followed by Spain (9 per cent), China (7 per cent) and the UK (5 per cent). Together, all the five countries accounted for 70 per cent of total FDI capital inflows and 51 per cent of FDI projects into Dubai last year.

“Dubai FDI Monitor is a testament to Dubai’s commitment to enhance competitiveness and transparency of the emirate’s investment ecosystem, using innovative technologies and services to serve the global investor community,” Sheikh Hamdan added.

The fDi Benchmark, which identifies the best FDI destinations based on comparison of latest FDI data, highlighted that Dubai dominated global rankings throughout 2018, followed by London, Paris, Dublin and Singapore, as the leading city globally in foreign direct investment in 2018.

“The achievement reflects the resilience, diversity and competitiveness of Dubai’s economy on a global scale,” said Sami Al Qamzi, director-general of Department of Economic Development, Dubai.

He noted that fDi Benchmark has clearly identified Dubai’s leading position and strong presence in all areas of investments in 2018.

“Dubai has been ranked first globally among the top 20 cities for renewable energy investments between 2013-2018 and second globally in the ‘Global Cities of the Future 2018 – 2019’ report in terms of economic potential. Dubai also ranked first among the top FDI cities in the ‘City FDI Performance Index,’ issued for the first time in 2018,” Qamzi said.

In terms of top attractive sectors, FDI flows were largely concentrated in the accommodation and food services sectors with 46 per cent of total FDI capital, followed by commercial construction at 15 per cent, residential buildings construction at 8 per cent, arts, entertainment and recreation at five per cent, and finance and insurance at four per cent.

The top five sectors accounted for 78 per cent of all FDI capital and 27 per cent of FDI projects into Dubai in 2018.

Massimo Falcioni, chief executive officer of Etihad Credit Insurance, said the advent of Dubai as one of the Top FDI Performers 2018 is a momentous achievement for the emirate and the UAE economy at large.

“Dubai being heralded as a potential investment hub not only reflects the investors’ belief in the city’s capability to sustain economic growth but it also positions ECI to play a crucial role in encouraging the development and international expansion of local businesses, said Falcioni.

Abhishek Sharma, CEO of Foundation Holdings, said healthcare and education firms in the UAE and especially Dubai have attracted and continue to attract FDI by exploring potential partnerships with renowned international players in the fields.

“Such partnerships aim to bring in the latest innovations that further elevate the UAE’s investment environment. For instance, Dubai Healthcare City has partnered with and attracted numerous renowned healthcare institutions such as Moorfields Eye Hospital, Mediclinic, Harvard Medical School Center amongst others. The FDI law passed last year by the UAE government will help influence and transition the country to an innovation driven economy,” Sharma added. 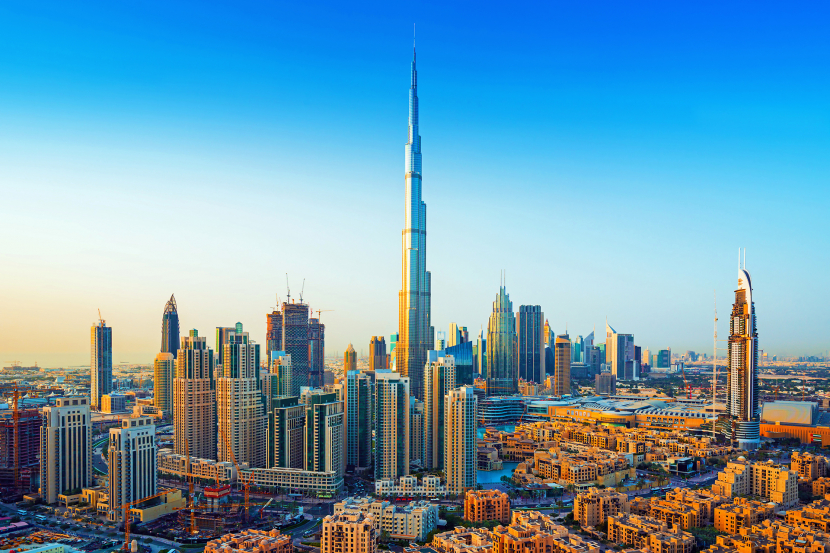 Construction intelligence and procurement platform, ProTenders, has announced that it has successfully completed a Pre-Series A funding by a prominent group of UAE-based investors.

The investment will focus on the growth of ProTenders’ operations across customer success, sales, marketing and research regionally and in Asian markets, as well as strengthening the product offering to include blockchain and smart contracts.

Karim Helal, co-founder and CEO of ProTenders, said: “ProTenders empowers companies to reduce risk and improve efficiency in finding new leads and partners, securely and efficiently. With the strong support from our investors, we are confident that ProTenders will contribute efficiently to digitally transforming the construction industry. From our award-winning e-Tendering solution to insights on $2.62 trillion worth of GCC projects to our online product catalog directory, ProTenders exists to empower every property developer and every construction company to build more sustainably in the Middle East and globally.”

Commenting on the investment with ProTenders, Hamda Saeed Al Otaiba, one of the investors, said: “At this day and age, the trend of investments have shifted from material ones to virtual technological ones where investment in alternative solutions are needed. Construction is an industry that has long required digital transformation, and ProTenders is well-positioned to bring digitalization to the industry. In addition, the high calibre professionals are the backbone of the company and will ensure its steady and fast growth in a short period of time to guarantee excellent returns for its investors.”

The Pre-Series A financing follows an exceptional last 24-months for ProTenders which includes winning distinguishing awards for its innovative technology, an increasing customer base across the region and globally, and the signing of a 3-year e-Tendering deal with Damac Properties.