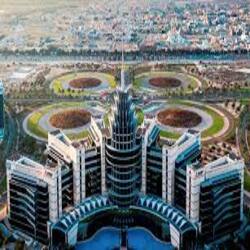 Companies and individuals licensed in the economic zones under the authority are exempted from all taxes for 50 years.

A new economic zone authority will be established in Dubai, based on a law issued on Monday by His Highness Sheikh Mohammed bin Rashid Al Maktoum, Vice-President and Prime Minister of the UAE and Ruler of Dubai.

The new Dubai Integrated Economic Zones Authority — an independent legal entity with financial and administrative autonomy — will be supervising the operations of the Dubai Airport Free Zone, Dubai Silicon Oasis and Dubai Commerce City, according to Law No. (16) of 2021.

The new law and appointment decrees will be published in the Official Gazette and are effective from January 1, 2022.

Sheikh Mohammed bin Rashid said the creation of the Dubai Integrated Economic Zones Authority was part of the emirate’s efforts to raise the speed and efficiency of services for businesses and investors. This, in turn, will help accelerate economic growth.

“The establishment of the Dubai Integrated Economic Zones Authority is a vital move to enhance Dubai’s global competitiveness and raise its investment attractiveness,” the Dubai Ruler said.

“Our objective is to make Dubai the destination of choice for global investors and a major focal point for global commerce.”

The initiative also seeks to consolidate the success of free zones in catalysing growth and adding value to the national economy.

Over 5,000 international firms, covering 20 key economic sectors and employing 30,000 employees from all over the world, will operate under the Dubai Integrated Economic Zones Authority. The economic activity that will be regulated by the authority generates five per cent of Dubai’s GDP.

Companies and individuals licensed in the integrated economic zones under the authority are exempted from all taxes — including income tax — for 50 years, effective from the date of the new law. This exemption period can be renewed for a similar period through a decision issued by the Dubai Ruler.

All subsidiaries of the Dubai Integrated Economic Zones Authority and companies or individuals licensed by the authority are exempted from restrictions on repatriation of capital, profits and salaries in any currency and to any destination outside its zones. This exemption is valid for 50 years, renewable for a similar period by a decision issued by the Dubai Ruler.

Furthermore, the funds of licensed companies and their employees will not be subject to nationalisation or restricted ownership.

“Our focus is on integrating government processes and facilitating greater access to global markets through an accelerated transition to a digital environment,” Sheikh Mohammed said.

One of the authority’s key priorities is to attract local and international companies to set up their headquarters in integrated economic zones of the emirate.

It also aims to support SMEs and drive entrepreneurship and innovation across sectors.

The authority is tasked with creating, developing and managing the infrastructure and administrative services of integrated economic zones, and regulate business activities and services, including the import and storage of merchandise.

Sheikh Mohammed highlighted that the private sector is a major partner in Dubai’s development journey over the next 50 years.

“We remain committed to strengthening our partnership with the private sector and making our business environment more attractive, both of which are key to sustained growth in our new phase of development,” the Dubai Ruler said. 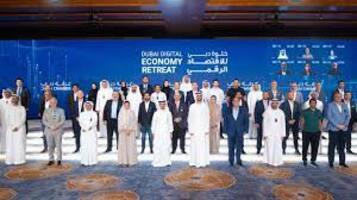 The Dubai Digital Economy Retreat concluded on Wednesday with the adoption of a new action plan designed to develop Dubai’s digital economy strategy.

Discussions at the event generated several practical recommendations to address existing challenges in the market.

The two-day retreat, organised by the Dubai Chamber of Digital Economy, supports the vision of His Highness Sheikh Mohammed bin Rashid Al Maktoum, Vice-President and Prime Minister of the UAE and Ruler of Dubai, to position Dubai as a global digital economy capital.

Interactive workshops during the event identified key market issues and challenges, including the need to attract more digital companies and specialised talent to Dubai, high costs for companies operating in this sector, encouraging more digital startups and enhancing investments in growing these businesses, widening acceptance of e-commerce payments and removing barriers of entry and enhancing the quality of services operating in this space.

The plan emphasises the importance of understanding the current and future infrastructure needs of the digital economy, facilitating access to funding and managing relationships and networks abroad with digital-related entities.

He noted that the retreat achieved its objectives of involving private sector stakeholders in key discussions with their public sector counterparts that will shape Dubai’s future vision and enhance the emirate’s economic competitiveness in the long term.

Buamim said the retreat complements Dubai Chamber’s efforts to facilitate and streamline public-private sector cooperation, support and protect the interests of its members and meet the changing needs of Dubai’s fast-growing business community as it adapts to a new reality in the Covid-era and beyond.

Buamim described the retreat as an ideal platform for open and constructive dialogue that is crucial in paving the way for major initiatives that will accelerate the next phase of Dubai’s economic growth and development.

Besides the GCC, India is conducting FTA-related talks with the UK, Australia and the European Union

India’s revived discussions for concluding a Free Trade Agreement (FTA) with the UAE and other GCC countries are “progressing fast” and will enable the country to become a global trading hub, according to Piyush Goyal, the Minister for Commerce, Industry and Consumer Affairs.

Addressing a large cross-section of India’s business through the platform of the Jain International Trade Organisation, Goyal cited the UAE specifically as among the countries with which his Ministry is engaged in talks towards reaching an FTA.

Besides the GCC, India is conducting FTA-related talks with the UK, Australia and the European Union.

The India-GCC FTA talks, which started in 2004, were suspended in 2008, but with the active involvement of the UAE, they were revived again recently as both countries expect to see the two-way trade crossing the $100 billion-mark in the coming years from the current $60 billion given the stronger bilateral engagements in the wake of state-level visits by leaders of both countries. However, now the UAE and India have decided to work on a separate free trade pact as it would not need as much coordination.

The UAE is still the third-largest trading partner of India despite a dip in both exports and imports in 2020-21 due to the pandemic. India’s exports to UAE last fiscal were valued at $16.7 billion while imports from the country were at $26.6 billion. Nearly 8.0 per cent of India’s oil is also sourced from the UAE.

Home to 3.4 million Indian expatriates generating the highest remittances from abroad, the UAE is also among the top 10 investors in India with an estimated $11 billion in investments, more than half of which is in the form of foreign direct investment (FDI).

Goyal said the pace of discussions has now gathered speed. Traders and exporters are the “twin pistons powering the economic growth engine of India. We firmly believe in the capabilities of the business community as well as of start-ups.”

The FTAs will enable India to become a global “trading hub,” Goyal hoped.

The Jain International Trade Organisation is conducting a 12-day virtual expo with the participation of several thousand businesses and entrepreneurs.

An Indian government official has said India had revived the FTA talks with the UAE, its third global trading partner, with expectations of a larger pact with the other GCC countries taking place subsequently.

“As the UAE has been very keen to advance an FTA between India and the GCC, which has been pending for a long time, the two countries decided to first go ahead and work out a deal amongst themselves,” the official was quoted as saying. The initial talks have started on a virtual mode.

He said the GCC is of both economic and strategic interest to India as it had emerged as one of the largest trading partners. Its substantial oil and gas reserves is also of great importance for the country’s energy needs. Moreover, it is a source of increased foreign investments into India.

In FY21, India imported goods worth $80.5 billion from GCC countries, while exports amounted to $40.5 billion. About half this trade is with the UAE.

A Framework Agreement on Economic Cooperation between India and the GCC was signed in 2004 that provided for both parties to consider ways and means to extend and liberalise trade relations besides initiating discussions on the feasibility of an FTA. Two rounds of negotiations were held —in 2006 and 2008. The movement of natural persons is one of the four ways through which services can be supplied internationally. It includes the movement of natural persons such as independent professionals and is of key interest to India in its global trade relations.

India stands to gain in services as well and could push for long-term business visas with the UAE, experts said.

“We have a geographic advantage with that region and a lot of business travel happens. Long-term business visas will be beneficial for India,” said an expert on trade issues.

Easier movement of professionals, called Mode 4 in trade parlance, could also be among India’s demands, the expert said.